You are donating to : Fresh Water Project

The “Fresh Water” project in the village of Paunangisu not only involves a 6000 litre plastic tank to catch water off the toilet building, but also the 20,000 litre water tank at right.has been built for the whole village community with the following goals in mind:

This tank was a “flat-pack” affair made out of 15 sheets of curved Colorbond held together with an awful lot of bolts, with a very strong plastic liner inside, plus a Colorbond roof on top.
The tank was generously donated by South Australian company Aquamate – just an amazing gesture, worth nearly $5,000 once free delivery was included.
To get water into the tank of course requires gutters and downpipes plus lots of joiners. These were all obtained in Port Vila and whilst it was mostly local volunteer village labour that put the bits together, it was “backyard blitz John” who conducted the “orchestra”, so to speak; in his spare time while also directing the toilet construction.

It is true that occasional passing showers have already directed a few drops into the tank, but it is hoped that a serious tropical downpour – when it finally comes – will fill the tank in a just a few hours. 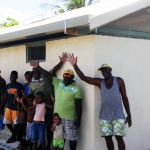 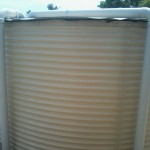 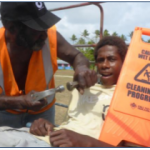